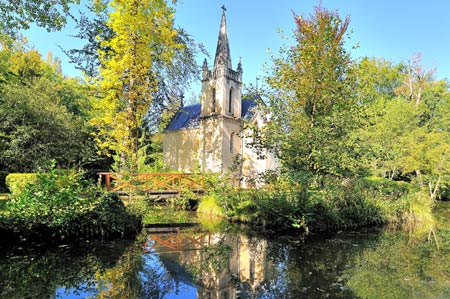 The archives do not provide clear information about Domaine de La Solitude’s origins. Similarly, it is difficult to put a precise date on the beginnings of its wine-producing vocation, although it would be sensible to consider that its story intertwines with the historic emergence of the vineyards in the northern area of Graves. The only known historical fact is that the classic main building beside the cellars, called “L’Ermitage”, was once a hunting lodge used by Montesquieu.
Effectively, it is only really from the start of the 19th century and from the settlement of the Sainte-Famille community at La Solitude that we have in our possession an explicit chronological history about the Domaine.

In founding the Association of the Holy Family in 1820, Bordeaux priest Pierre Bienvenu Noailles was inspired by the first Christian communities, consisting of men and women from all walks of life – lay people, nuns, and priests – to form a brotherhood showing the world how united a large evangelistic community can be, and with respect for diversity. Under the patronage of the Holy Family, the the founder’s spiritual reference and source of inspiration, the Association encompasses apostolic sisters, contemplative sisters, members of the secular institute, lay people, and associated priests.

The contract which unites the community of the Sainte Famille and the land of Graves goes back to 1831. The first disciples of Pierre Bienvenu Noailles – three women, one of whom was his own sister – settled at The Hermitage and divided their time between labouring in the fields and the running of an orphanage. Today, the Association of la Sainte Famille, which has spread throughout the whole world, now accounts for nearly three thousand members.

In competition with other food-producing industries in the area, and badly led following a succession of crises and wars which sprinkled the latter period of the 19th century and the first period of the 20th, the vineyard of La Solitude had been prevented from showing its true potential.

It was only with the boom of the seventies that the nuns, conscious of the necessity to capitalise upon their wine-producing assets – a business activity hardly compatible with their way of life – took the decision to abandon management and entrust it to external stakeholders. This decision was to bear fruit and the vineyard of La Solitude, up to this point virtually isolated, would slowly begin to integrate into the alliance of the Graves du Nord production.

Nevertheless, due to a design fault which needed a lot of investment to correct, the Domaine took a while
to find the right path. Incompatible cultural practices were notably conserved with research for optimal quality (weeding, mechanical grape harvesting etc.). As a result, during the eighties, La Solitude, whose reputation had undeniably improved, produced wines of honourable quality, albeit with a relatively simple and “vegetal” (a green taste, unripened fruit) expression.

In 1993, a few months after having been solicited by the Sisters of la Sainte Famille, Olivier Bernard, who has overseen the Domaine de Chevalier since 1983, accepted the tenancy of the wine producing Domaine de la Solitude for a period of 40 years.