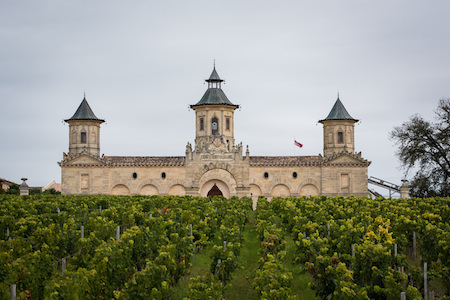 Louis Gaspard d’Estournel inherited Cos and Pomys in 1791. Deeply convinced that theterroir of the hill of Cos was exceptional, he took many risks to enhance his estate, investing massively in the acquisition of neighboring land. Throughout his lifetime Louis Gaspard d’Estournel remained closely involved in the
management of Cos d’Estournel. He fought endlessly to promote his estate, even if it meant having to sell it to finance his debts before acquiring it once again. This interest in overseas markets fueled a passion for faraway places that would serve as inspiration for the singular architecture of his estate, a sumptuous palace dedicated to wine, topped with monumental pagodas. Louis Gaspard d’Estournel would remain an enigmatic and original figure amongst his peers. This, coupled with his obsession for the foreign and the exotic, would earn him the nickname of Maharajah of Saint-Estèphe. Louis Gaspard d’Estournel would live to see his wine designated a Deuxième Grand Cru du Médoc by the negociants of Bordeaux but sadly enough, he passed away two years before the 1855 Bordeaux Classification officially recognized Cos d’Estournel as a Second Growth Estate. Owner of Cos d’Estournel since 2000, entrepreneur Michel Reybier is a simple and discreet man. Moved by the extraordinary personality of the estate and the audacity of its founder, his decision to acquire was not motivated by financial considerations alone. For him, the choice was clear: it would be “Cos and only Cos.” Today he remains deeply attached to his vineyard. “

At first glance, I was attracted by the history of the place. And then when I visited the estate, I felt instantly how unique, how exceptional it is.” Michel Reybier is an active presence throughout the year and a major actor in the estate’s development. In this he resembles his predecessor Louis Gaspard d’Estournel, with whom he also shares a profound passion for Cos d’Estournel. Under the direction of Michel Reybier, innovation and tradition find balance at Cos d’Estournel and the anticonformist spirit of its founder lives on to this day. But being different is not an end in itself: the goal has always been to draw on the exceptional qualities of the vineyard to produce wines of unsurpassed quality. It has proven a recurring theme, centuries ago under the ownership of Louis Gaspard d’Estournel and now under the direction of Michel Reybier. The two men are united not only in their common business interests and their pursuit of excellence at Cos d’Estournel: they also share the same love of beauty and understated luxury to which the singular charms of the estate may be attributed.