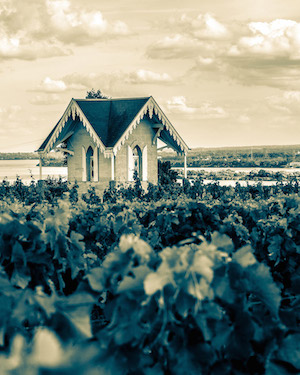 This property is located on the site af an ancient abbey from the 14th century. It was alreday mentionned in the 1874 FERET editions as a Second Cru Bourgeois and First Cru Artisan.

After the ownership of Maître MENARD, the vineyard was transmitted to his son-in-law Henri COUTIN, notary in Jonzac, who changed the name into Clos du Notaire. In 1974, Roaland and Sylvette CHABRONNIER took over Jacques COUTIN, Henri’s son. They built the property as it is today. Since the 2015 harvests, Amélie OSMOND and Victor MISCHLER bought the estate for which they litterally fell in love. The beauty of the terroir, the modern equipments, the location, and the micro climate brought by the proximty from the Gironde Estuary were more than enough for them to jump ahead. One goal: let this magnificent terroir express itself while maintaining the tradition of quality in the vinyard and the winery. One philosophy: sustainable development, environmentally friendly decisions, and passion above all… This terroir, coupled with a meticulous vinification and an aging in tanks and new barrels, produces a wine where the oak has role but with no excess, round, soft on the palate and strongly aromatic.

These qualities enabled Clos du Notaire lots of medals in Paris, Bordeaux, Mâcon, as well as many appearances in specialized magazines. Château Clos du Notaire has graded 90/100 for the viintage 2015 during the DECANTER World Wine Award.