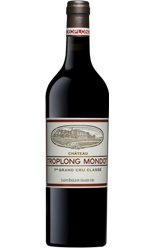 Troplong Mondot is one of its most beautiful ongoing testimonials of thevery old tradition of wine growing in Saint-Émilion. At the beginning of the XVIIIth century, the Mondot estate belonged to one of the most prestigious aristocratic families in Gironde: the de Sèze family. They became famous by defending Louis XVI before the Constitution. The count, Peer de France, who was also a member of the French Academy, naturally brought his renown to the property, and the wine of Mondot became among the most sought after in Saint-Émilion. In 1850, Raymond-Théodore Troplong acquired Mondot. Inspite of already having many and important national responsibilities, this jurist, President of the Senate under the Second Empire, helped contribute to expanding the vineyard and promoting the reputation of the estate. It was Edouard Troplong who, at the death of Raymond, inherited the vineyard. Following a trend at that period, he added Mondot to his own name. Troplong Mondot was born! At the beginning of the XXth century, the Valette family bought the property shaped by its previous owners. Had he remembered, in 1868 it was established as one of the “Grands” of Saint-Émilion in Féret’s list? Or had he been charmed by the magic of this property and the beauty of the garden surrounding this large attractive home facing the village of Saint-Émilion? At the beginning of the 1980’s, Christine and Xavier Pariente improve the quality of their wines and its renown around the world. Xavier Pariente, in a close collaboration with Jean-Philippe Fort, his winemaker and Claude and Lydia Bourguignon, specialists in sustainable development in soils, conducted an ecological study of the parcellar cultural profile to restore the biodiversity of the soils. The vineyard has been restructured and today, a third of the property is cultivated and worked only with horses. For decades, no insecticide nor pesticide has been used. A sustainable, original and innovative cultural approach is set up. Troplong Mondot is rewarded in 2006 by the ten-yearly classification of Saint-Emilion, placing Troplong Mondot First Great Classified Growth. In 2010, Xavier Pariente created the first guest rooms on the property and, in 2012, a gastronomic restaurant. “Les Belles Perdrix de Troplong Mondot” leave the nest. The success is immediate. In 2016, our Chef David Charrier obtains his first Michelin star. Aymeric de Gironde the new Troplong Mondot CEO, since 2017, the SCOR Society modernizes while keep the spirit.